Shaking Off The Fear

It is cold and wet. Stellar's Jays are not going far from their home in the tree tops and just a few came to eat at the feeders today. Haven't seen my crows either. Very cold and no let-up of the rain. I'll be keeping an eye out for the crows and feed them when I see them.

That said, I do have an attitude towards one jay who seems to feel it necessary to "alarm" squawk at me all the time. I have been scolding that one whenever they're around squawking at me. There has been benefits to my scolding them. That one is quieting down a bit. Especially when they find that I still give them peanuts.

Penelope continues to say thank you, as well as a couple of others. There's one who flies to the feeder, never touching down and takes a peanut out of the tuna can while hovering for just a fraction of a second and is gone in a heartbeat. So many different personalities and styles of motion. 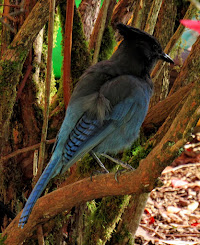 One thing I have seen consistently is in the younger ones: shivering, fluffing up their feathers just before they try to get a peanut from the feeder when I'm standing there. I think it is a process of mind that allows them to shake off the fear of coming that close to such a huge beast as me. They always do it just before attempting to fly to the feeder.

And then there is Penelope, who has taken peanuts from my hand. She is the one who thanks me for the peanuts, while on the feeder. It is a strange relationship I have with her. She is the one tossing the smaller peanuts out of the feeder in favor of the larger peanuts. Those are the ones the crows are getting, and probably a squirrel or two. 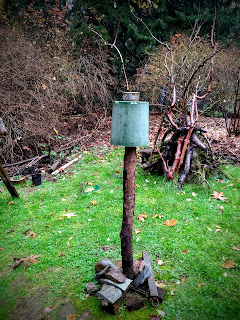 I have seen my crow take a peanut from the jay feeder. I originally tried to make a squirrel proof feeder for the crows out of some 'found' materials. It wasn't something the crows would be interested in because the branches were very thin, but strong. Jays love it. Jays hop, crows walk, ...and really, are clumsy. And they know their limitations and don't, usually, wind up on something they'll knock down. The usual time they do that is when there is definitely food there and no one is watching. But, I digress...

The crows give in to the jays' demands, jays are tough birds. They give Barred Owls hell often. By feeding my jays the way I'm feeding them I am able to keep them away from our "other" feeding areas. We have some suet cages and a couple other seed feeders around for the variety of birds that come through our world here. 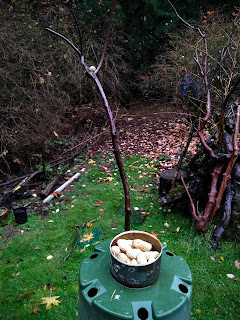 The way I see it, if the crow lets me know he/she=xe is there I distract the jays by filling the tuna can Jay feeder with peanuts. I also fill all the single peanut feeders (4 of them) and walk away. As soon as I leave there is holy pandemonium; all the jays are grabbing a peanut and finding some place to hide it to get another as quickly as possible. There're too many peanuts to go through for them to possibly follow me to the front yard. I drop a handful on the ground in the front yard and walk quickly back watching for jays following me. If I see one I can call them back to the feeders. LOL

In the meantime my crow has put out the call and 3 other crows come down and swiftly take all the peanuts and are gone. It's one of the most fun games I've ever played and the crows and I are playing it against the jays.

Crows are such a persecuted lot. Humans routinely chase them and harm them for their forays into yards for scraps of food where ever they can find it.

It was a curious thing to see today when I fed the Stellar's Jays. I have this routine where I fill a small tuna can on the feeder with peanuts and place them in the other single peanut holders. I then walk to the front yard and look to see if my crows are watching. If they make themselves known, I put a handful of peanuts out for them. I do not want the Jays to get used to going to the front yard (or anywhere else for that matter) for food. If my crow sees me xe calls their friends and they quickly pick up the peanuts from the ground before the jays are done fighting in the back yard at the feeders. Well, the crows finished before the jays were done and one crow came back to the jay feeders and was trying to take a peanut from the ground where the jays 'purposefully' dropped the smaller peanuts in favor of the larger ones. As xe was approaching their stance was one of ducking, avoiding being attacked by the jays; this big bird, being scared by the likes of the Stellar's Jays.