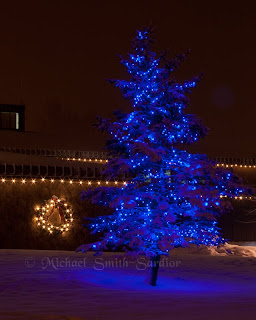 Last night I was out in a snow storm again to take photos of the winter evenings/nights. Apparently the City does not turn on the Holiday lights in the park as an effort to save its budget. This has been a real disappointment for many of the Flagstaff Residents. It is understandable, but still a disappointment. This first image is of the only tree in front of city hall lit up with holiday lights.

In the searches for some really bizarre looking scenes I decided to check out the Church of the Nativity again. The lights are on there sporadically, but even without the church lights turned on the street lights create some really strange effects. The lights were on. So I started taking photos of this structure built around the turn of the 20th century. 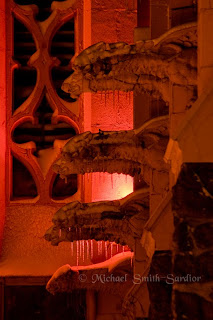 The church is painted pink on the concrete surfaces and volcanic stone faces the rest of the structure. What amazes me is that the lights on the church itself are reddish orange. Now I don't know what prompted them to put that color of light on the church, but when looking at it from a distance it carries with it a red glow, much more pronounced than just incandescent lighting. Photographs make it look a hellish red. I wonder sometimes if this isn't a subconscious or even conscious effort to scare; images in the back of the mind, constant reminders of Hell. And these images can only be seen at night, the time of Horace/Satan/Pluto/Hades.

Something interesting to note is that there have been no new Catholic churches built with gargoyles. And in Europe they had quit building them a long time before this one was built (close to 100 years before). Why would they put gargoyles on a "modern" church. David Icke brings up an interesting idea that he came across in his studies. Only Catholic churches with catacombs have gargoyles on them. A little investigation into the subterranean of Flagstaff shows that there are underground tunnels all over the city and they actually connect to the underground structures of the Church of the Nativity. You cannot enter the church from underground (locked) but if there are structures underground then it is not out of the realm of possibilities that there exists catacombs of some kind or another.

So, here are some of the photos that I took last night and the thoughts that ran through my head as I was taking them. Enjoy!
Posted by Sardior at 9:23 AM No comments: